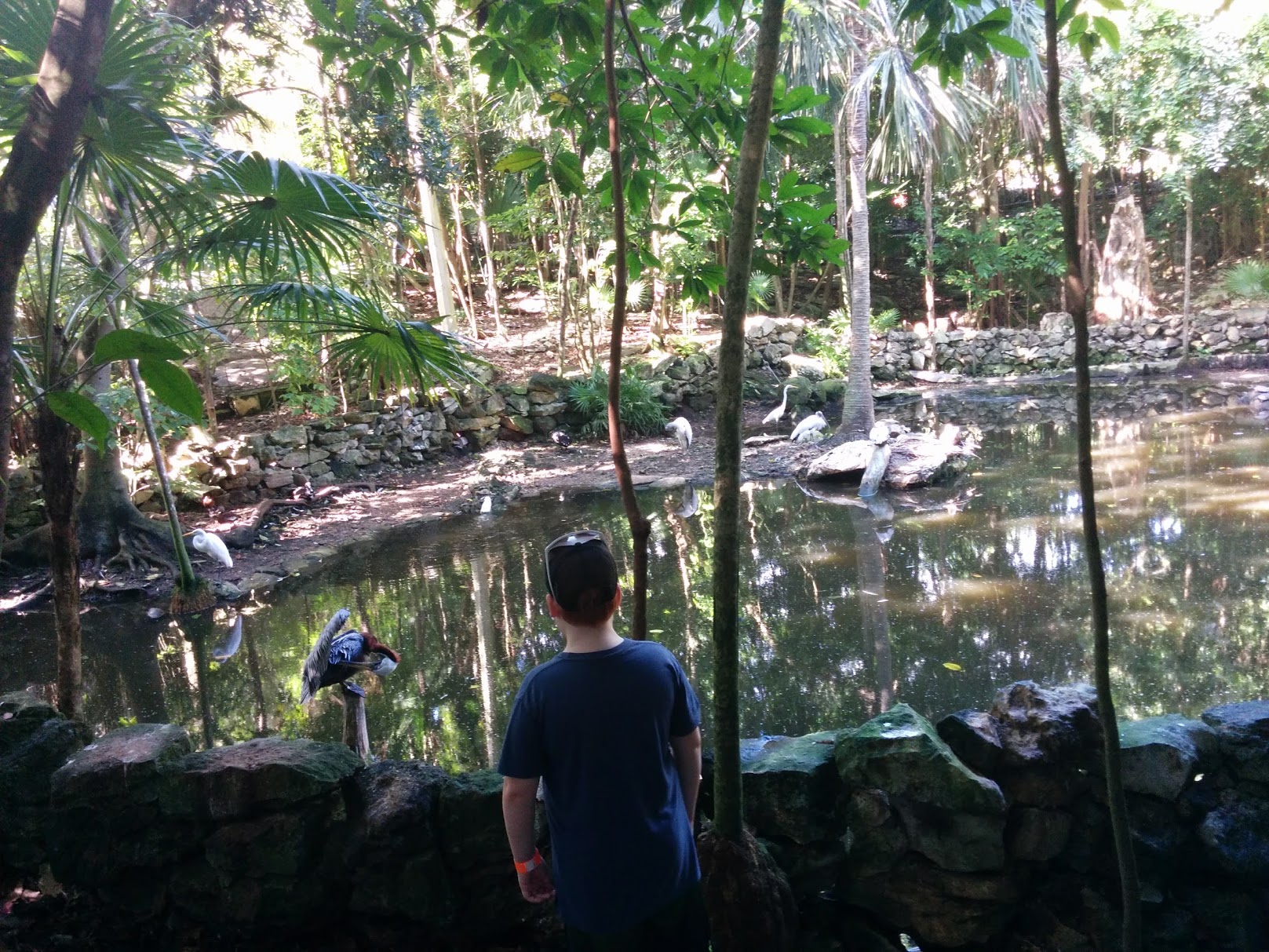 Kiddo and I decided to make a quick trip to the Xaman-Ha Aviary.  As vegans, we usually avoid most animal attractions such as zoos, but we had heard that the birds in this aviary were indigenous to the area and free to come and go. Some websites even refer to it as a sanctuary.  Since it was very nearby to our condo, and we love birds, we decided to have a look for ourselves.

The aviary is a located in the Playacar Phase 2 area of Playa del Carmen. It is quite near the entrance at 10th Avenue (entrada 1) and the jungle path that leads to the Playacar beach.   If you’re looking for it on a map, it’s clearly labeled as Xaman-Ha Aviary and is searchable via Google Maps. The place is also a Pokemon gym, the only one in that area, which makes it easy to find while using the app.  There is a very small amount of parking, should you arrive by car.

Admission cost is relatively high compared to many local attractions at around USD$15 for adults or 300 pesos, but kids under 12 are free. We were asked to sign a guest log and were given wristbands and then left to explore.

The place itself is relatively small, with windy paths made of rocks that lead you from area to area. It is most definitely NOT handicapped accessible and actually pretty hilly. You’ll want bug repellent and should wear shoes with a good grip as there are places where the rocks are quite slippery. There are several ponds and one penned area, with bench seating scattered throughout.  There are bathrooms near the front, but nothing else in the way of amenities. There is NO information anywhere at all about the aviary, its mission, what kind of birds you’ll see, etc.

We were the only guests there for the majority of our visit, which lasted a little less than an hour, moving very slowly. As we made our way around the winding paths, what we found was that MANY birds are free to come and go, but others seem to have their wings clipped or are penned in, so most definitely not there by choice.  🙁  I’m not sure if some or all of the birds are rehabbed, or if they were cultivated for the attraction. Our assumption is that the birds that are loose likely return to the area because they are fed/baited.

Straightaway after entering we saw parrots, which seems to be kept (somehow) right at the entrance point.  At one of the ponds we saw flamingos, herons and other wading birds.  Another pond had water birds such as ducks and pelicans. In the penned area, we saw some bright birds that we’d seen previously flying around the Playacar neighborhood, like the yucatan jay. We also saw some larger turkey/peacock sized birds that I have yet to identify.  In addition to the birds, there were lots of agoutis wandering around, as there are in many parts of Playacar.  We also saw turtles, iguanas and a few other creatures.

In all it was underwhelming and we were left feeling pretty ambivalent about our visit to this place.  If they really are a sanctuary (which is undetermined), and those birds that are caged are being rehabbed or cannot be returned to the wild,  I’d feel at least slightly more comfortable with having gone, but I really don’t think that’s the case.  As such, I don’t think we’ll be recommending it to anyone.