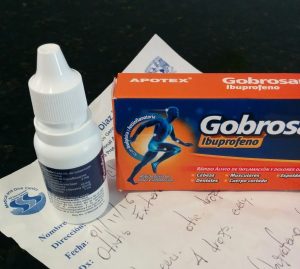 We got to experience the medico and farmacias yesterday for the first time. Poor kiddo is dealing with swimmer’s ear on one side and in a lot of pain when he usually has a very high pain tolerance. He’s never experienced anything like this before.

We started by getting some drops from the farmacia near our house that are known to often help with swimmer’s ear. The farmacias are often tiny little shops, with a few things out front but most stuff behind the counter.  We walked in, I asked for “drops for ear pain from swimming” in Spanish, paid under $2 and that was it. I gave kiddo the drops right away, but they did not help. By later in the day it was getting noticeably worse to the point we were both sure he needed to see a doctor.

We asked for recommendations via the Locals & Expats Facebook group and got a variety to choose from. We opted not to go to Hospiten, even though it’s close by, because it’s a large and busy medical center/hospital and knew without an appointment we’d be considered an emergency. The first one we tried, MD+Playa, was also close by and says on their website they do walk in appointments, but when we went there they didn’t have anything available until the next day. So we took an expensive cab down to the Playa International Clinic on the corner of 10th Ave and 28th. They specialize in treating diving related conditions and have a hyperbaric oxygen chamber, but had been recommended by many people because as such they are also very good with anything related to ears.

When we got to the clinic, it was empty save the receptionist/assistant at the front. He didn’t speak English, but I managed my way through the conversations and paperwork as best I could. At first I think they balked a bit at kiddo being young. Pretty sure if I understood correctly that the assistant went to ask the doctor if it was OK before checking us in. So I’m not sure they usually see little kids, but kiddo was cooperative and it all went well.

The doctor we saw had fluent English and was great with our son. It was otitis externa as expected. He said the drops we’d gotten at the farmacia earlier were not the ones needed in this instance and gave us a script for a cipro based antibiotic drops, plus ibuprofen. He also offered to do a shot too if we wanted it and said it would speed up treatment. (We’d heard from friends that a lot of medicine in Mexico is given via injection.) Kiddo had a very fear based reaction to that though and at his strong insistence we opted not to get it. The doctor was totally OK with that too, said it would help but wasn’t necessary.

We also learned that because of the warm water and high humidity here we should be treating our ears with vinegar/rubbing alcohol or something similar after EVERY swim. Very good to know!

It was a good experience overall and it only cost us 580 pesos for the visit, so just under $30!  Amazing for a specialty walk-in clinic. We walked to a farmacia near there where we were able to get the drops and pills for under $5.  They also gave me the paper back. Turns out it’s not a prescription in the sense we know at home, more just a paper that tells what we needed. You don’t have to have a prescription for most things here.

We visited a few restaurants and shops down near the clinic that we’d been meaning to get to, and then found a taxi to take us back because it was too far for kiddo to walk, plus raining on and off. We saw a few Dia de Muertos celebrations happening along the way, plus a few altars.  I tried my best to tell the taxi driver where to take us, but he didn’t understand me and said something lengthy to me in return. I apologized and explained that I only knew a little Spanish and was trying hard to learn, he said “yeah, very little!” in return. Way to rub it in guy; that’s no way to earn yourself a good tip!  He knew in general where we needed to be and I had him drop us off at a corner near to where we are staying. It was easier just to walk the rest of the way since frustratingly I couldn’t remember the words for left, right and turn here.

When we got back, I realized that I couldn’t give kiddo the ibuprofen the farmacia had given us. It said not to give to kids under 12, and they were also gel caps (not vegan), so I gave him some ibuprofen we’d brought along from home and then went to the local farmacia again this morning to get more (under $2).

In total the doctor and three pharmacy visits all cost me less than the $50 fee our insurance charges us at home to see a doctor!

Kiddo was quite upset once he realized that this has ruined his swim every day goal. He asked me to look for possible options, but there really aren’t any. Ear plugs and a swim camp would help, but there’s still a chance water could get in, so he really needs to just not get wet during the course of the treatment.

I mentioned perhaps we could wade or even sit in the shallow end of the pool to keep his streak going, but he said that wouldn’t count because we wouldn’t actually be swimming. I guess self imposed goals can have self imposed restrictions! Luckily it’s only four days. We’ll have to find some fun things to do in the meantime.