Skip to content
Halloween in Mexico! Yes, they have it here too! We saw house parties, trick-or-treaters in our neighborhood, plus HUGE crowds of people on Quinta Avenida, Playa del Carmen’s hot spot.

When asked to go trick or treating with some other worldschoolers kiddo needed an impromptu Halloween costume. This is what we figured out! 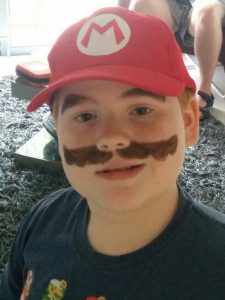 He got a lot of smiles and a few nice comments from people recognizing who he was meant to be (Mario), some compliments on his mustache, and a joke about shaving. Plus, one older guy that asked if he was Pancho Villa!

We met some friends at a restaurant before heading to Quinta Avenida and ultimately ended up in the Quinta Alegria mall area.

The atmosphere was great, very festive and positive. There were lots of people of all ages in costume and some with Catrina makeup. Random people were handing out candy and some swapping was going on as well among the costumed kids. I got the impression many if not most people bring some planning to give as well as receive and Kiddo just gave away most of what he got. There was even an informal parade!

It was all a bit different from the neighborhood trick or treating we are used to at home in the upper midwest, starting with the weather.  It was soooo humid and rained while we were walking to the restaurant to meet everyone, but then thankfully the showers held off for most of the night. For kiddo (and others) sweating off the makeup was a real concern! A bit different than trying to fit a coat under a costume like we’re used to.

Only bad part of the day was that he has swimmer’s ear (I think) which made him a bit irritable! A downside to the swim every day plan I guess?