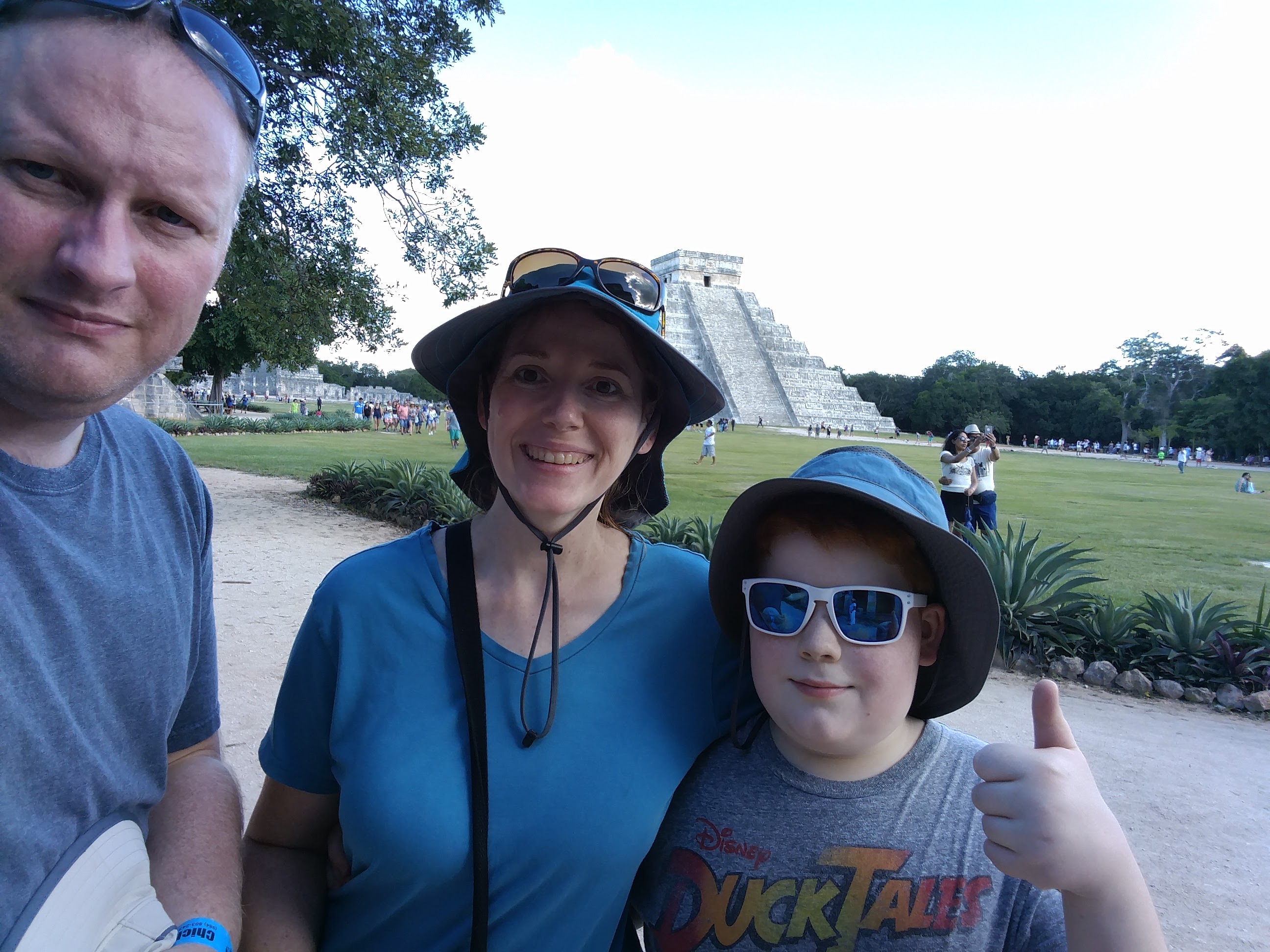 I can hardly describe how amazing it was to get to go to one of the new Seven Wonders of the World, as well as one of the most impressive cenotes on the Yucatan peninsula!

Our day started off very early. We were picked up in our neighborhood by a van, which brought us to a bus, where I got to use my limited Spanish and Google Translate to help us get moved to a different bus so we could join up with some friends that had helped us book the tour.  We had a brief toilet stop at a location with a cenote, then crossed over into Yucatan and went straight to swim at Cenote Ik-Kil!

If you don’t know what a cenote is, it’s a water-filled sinkhole formed by a collapse in limestone bedrock. Cenote Ik-Kil is notable, at 200ft across with foliage up the sides and waterfalls. The water level is 85ft down from ground level, so you must traverse a lot of slippery stairs in order to swim. Many cenotes have crystal clear water, but this one is different because the water is 130 feet deep. We didn’t see any fish, but know that black catfish live in it.

There were plaques around lauding that the cenote had been used for Red Bull cliff diving championships in years past, though the average person is now allowed to jump from the top. However, there are jump/diving platforms available at around 20 feet above the water. We didn’t try them out, but many others did. Instead kiddo chose to swim under a few of the waterfalls to see how that felt.

The water in very mineral rich, so compared to swimming in salt water, it feels like it’s harder to stay afloat. For those that aren’t good swimmers or just want to lounge without having to worry about it, there are life jackets for rent.  There are also ropes around the perimeter for people to hold on (or some people were standing on them). The grounds have a number of other attractions as well, including ruins, a gift shop, entertainment, etc.

Next we headed to a lunch buffet at a pretty hacienda. As a family of vegans, organized meals can be tough, even when they are buffet style. We had brought a bunch of food with us, but we still needed to go in and sit with the group anyway, so we decided to see what was on offer. Without the ability to ask the staff what was in things, the only items we found to eat on the buffet this day were a few fruits and vegetables. I had plain lettuce (that I dug out from under a chef salad mix), cantaloupe, watermelon and tried some papaya that turned out to be some sort of candied, syrupy mess. Kiddo broke down and decided to have a dinner roll, the first thing likely non-vegan he has ever knowingly chosen to eat.

This was definitely the low point to the day, but was at least partially redeemed by the great dancing that provided our lunchtime entertainment. There were two groups– some traditional folk dancers, as well as a Mayan tribal group. Afterwards kiddo got a pic with some of the performers before lathering up with sunscreen and getting back onto the bus to make the short trip to Chichen Itza. 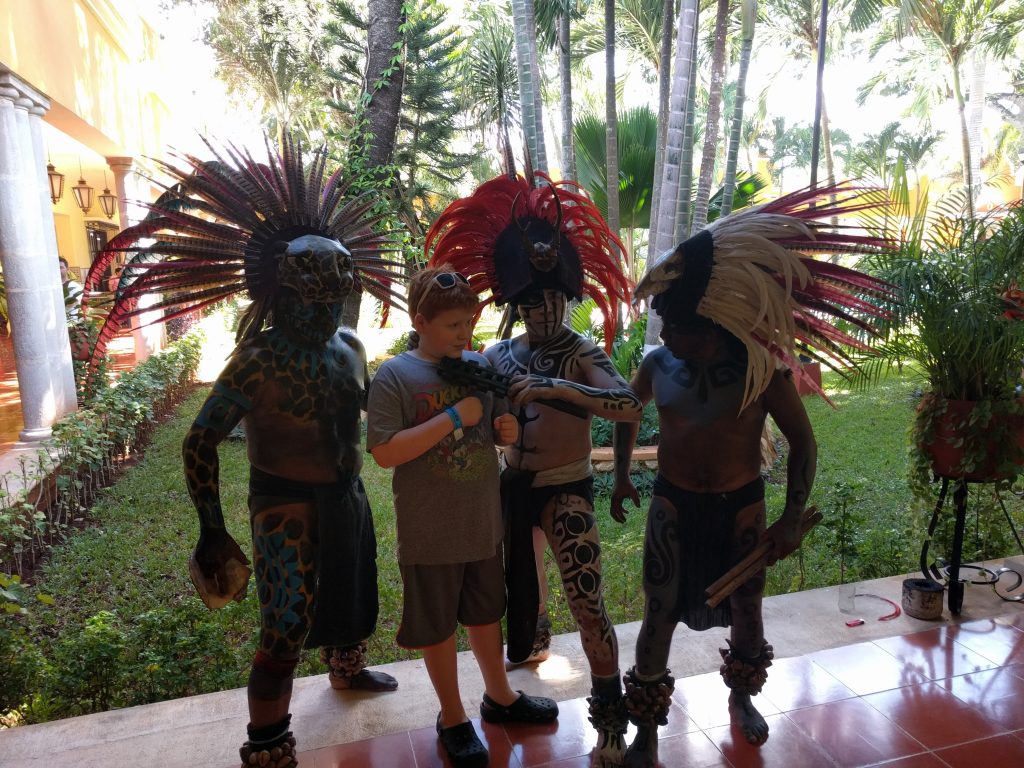 Chichen Itza is approximately three hours away from Playa del Carmen (PDC) by bus. The historic ruins were named one of the new seven wonders of the world and are a top tourist attraction for the Yucatan and Mexico in general.

It felt almost unreal to be there in person!  How amazing to see a pyramid up close, to wonder at how wise the early architects must have been to be able to plan things so precisely,  to be somewhere where human sacrifices used to occur!

On the way back, our stop was Valladolid. Valladolid is  We didn’t have a lot of time there, just a few minutes in the historical centro for food, toilets and a brief look around. We used our time to get a glimpse of the historic and beautiful Cathedral of San Gervasio located across the street Plaza e Parque Francisco Canton.

Throughout we had an excellent tour guide, Umberto, who really made the trip for me! He explained on morning bus ride that he’d descended from one of the indigenous Mayan tribes and taught us a lot about his culture. I learned sooooo much about Chichen Itza from him. He infused a sense of humor along with facts, pictures, demonstrations and even included our son in some of the interactions. He explained not only what all the ruins were, but brought them to life with stories as he provided context about what they were used for and why.  I am certain the trip would have been a completely different experience without his influence.

Overall this was a fabulous start to our time in Mexico, and likely a day we will never forget!!

Big thanks go to Easy Tours and to our friends Amanda and Seth from The Traveling Blizzards for inviting us to join them.