We recently took a short road trip to the Duluth and Grand Rapids, Minnesota areas to accompany one of the grandmas to a family reunion. We weren’t quite sure what to expect going into it. Grandma hadn’t seen most of these people for 20+ years. Dad had never met any of them while he was old enough to remember, and of course that meant kiddo and I had never met any of them either. The reunion was being held at someone’s home, and we didn’t know what it would be like, what there might be to do, who was coming, etc. etc. Still, Grandma and her family were very excited to get together and we said we’d go along.

When we went to book accommodation, nearly everything was full. We ended up stayed at the Comfort Inn West, which is on the southern edge of town near the interstate. It turned out to be a good choice, very clean and comfortable. We paid extra for an upgraded room that was a double queen almost identical to the standard rooms, but included a “kitchen” area that had a counter with cupboards, sink, microwave, and mini refrigerator. Being on the first floor, we did have reflections from lights when people pulled in and out of the parking lot and there was some noise from the hall. A soccer team was staying there (the hotel staff mentioned they are a frequent stop for traveling teams, and to be glad it wasn’t a hockey team!) and were a bit noisy, but it was manageable.

We were so excited to find out that Pizza Luce delivered to our hotel!! As you might remember from a previous post, they are extremely vegan friendly and have excellent pizza, pasta, sides and desserts. It was so good, and so convenient, that we ordered it twice on our two day trip!

In the morning from Duluth we drove over to Grand Rapids and out to the reunion site, a gorgeous lakefront home. I won’t bore you with details from the reunion, but will say that the highlight of the trip for kiddo was that he got to try stand up paddleboarding as well as kayaking! 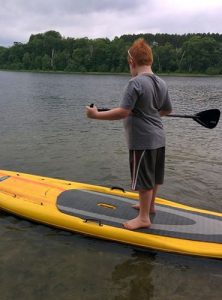 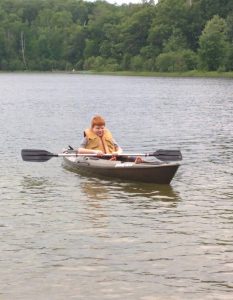 On the way back, we encountered a fierce thunderstorm. In one of the small towns we drove the sirens were sounding. We had no data signal for our cell phones, so we kept trying to tune in to different stations on the car radio to determine whether there was a tornado, hail or anything else we might need to worry about. We weren’t able to , even as many cars pulled over. Once we got back to Duluth and were again within range for a good cell connection, we found out that a strong storm with tornadoes had been heading our way but wasn’t yet there while we were driving through. It was a good thing we hadn’t stopped as many of the cars had done, or we’d have been sitting there for a long time waiting for it to pass and potentially have gotten caught up in it. Instead after some somewhat stressful driving we outran it and got back before the storm got to Duluth. We were able to watch it coming in, and it brought massive amounts of rain and flash flooding along with it.

We then spent another night in the hotel (much quieter without the soccer team) before making the long drive back home.