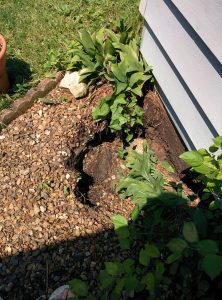 There are times when I hate being a homeowner. Right now is one of those times.

To be honest I’d have preferred if the dirt had stayed in the flower bed rather than making its way into our basement. We weren’t ready to spend money on more landscaping and the basement yet. Guess Mother Nature felt differently. We got 5″ of rain last night!

It’s hard to gauge the size from the picture, but there is a large sink hole, a few feet across and a few feet deep, outside near the stairwell entrance to the basement. There are a few smaller spots too in the same area that can’t be seen in this pic. Then downstairs in the basement, mud and water.

We waited just a little bit to clean it up.  When I went down to shovel I figured out that there was a lot more mud down there than I expected! I actually got stuck in it in my flip flops and had to go back in rain boots. It was several inches deep nearest the door. We shoveled and hauled out most of it, then hosed and pumped out most of the rest. Let’s just hope a bunch more doesn’t come in in next time it rains! 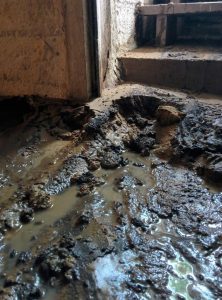 Nobody is available to fix the issues for awhile yet. The guy we trust that helped with our landscaping is booked up through the end of the year already! He did have me mail him some pictures for a quick look and gave me his feedback, as well as gave me a referral for another person that be able to help. He really wanted to assist, but just doesn’t have time right now. (I know how that goes!)

The good news is, it appears the foundation isn’t really damaged, but the wooden doorway has rotted through, and there are cracks in the stairwell area heading into the basement. We also need more drainage around the house (something we knew and had started on, but that area where the sink hole is was planned for the next phase.

We’re still waiting to get estimates, but I can already tell you that I’d rather be spending the money on something else.