In mid February we attended a brand new unschooling conference called Unschoolers Platform (UP)!  The conference was held at the Key Lime Cove waterpark in the Chicagoland area. 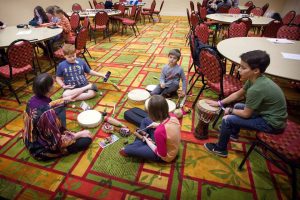 For the last three years we’ve attended the Unschoolers Waterpark Gathering (UWG) in Ohio and have loved it, so that was our baseline for what unschooling conferences are like. This one was much smaller by comparison and made a point of differentiating itself in some ways, but overall was well run and was a lot of fun.  There were a few families we recognized from past UWG conferences, but in general it was a different crowd, with many local to the Chicago area.

The venue was a great size for the group we had. The conference area only had three or four rooms, and the same one was used for all the funshops (fun workshops focused on a specific topic).

I particularly loved that in the kids room they had tables designated at all times for gaming, LEGO and crafting. That let the kids have a common space to hangout. Even if they didn’t want to attend a particular funshop they could be playing on their 3DS or computer,  drawing or building things instead. The large room in the middle was always used for the s 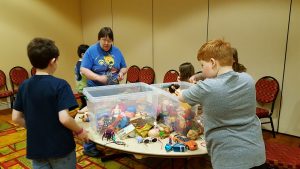 peakers, which meant it was easy for the kids to know at all times where their parent would be located, right next door. A third room was designated for the tweens/teens.

Our kiddo participated in several funshops, but I think his favorite was the mutant toys! A huge tote of old and broken toys was provided along with craft supplies like a hot glue gun, to allow the kids to come up with their own custom toy creation. He also attended a drumming circle, made artist trading cards, and more.

I was particularly glad that this conference also had a scheduled time for the moms to hangout. It was well planned for late afternoon and even had complimentary champagne for those that were interested! 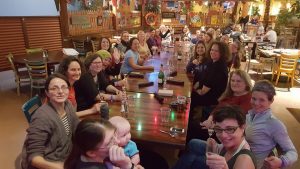 The waterpark has a lot of attractions but is not so massive that you can easily lose each other. Key

Lime Cove has something for everyone, with a designated slide area for the smallest, a climbing playground with both open and closed slides for the older ones, a lazy river and small wave pool, plus some body and tube slides.

In past, our kiddo has been unwilling to go on any of the larger slides. Our first year at UWG we went on a crazy one where we rode on a circular tube down a slide that brought us in and out of the dark, went in circles, and made us feel ill.  That put him off almost all slides, other than the small, non-tunnel variety.  This year thanks to the larger, open slides at Key Lime Cove, our son was willing to give those a try. That progressed to trying increasingly larger slides, until he was excited to go on every one in the waterpark! It was so great to watch his confidence grow and he explained that it felt amazing to know he had finally conquered his fears. 🙂

Kiddo’s 9th birthday also occurred while we were at the event. We gave him a couple small gifts while we were there. Some friends of ours also attended (one family that is local to our home base) and they purchased our son a present from the Usborne Books vendor that was stationed in the conference area.

Overall Unschoolers Platform turned out to be a well planned event with some great speakers, and they’re already planning another one for next year. If it works out with our other plans, we’ll be sure to attend again.