Skip to content
Remember how we signed up for snorkeling and a glass bottom boat tour at the dinner? Well when we woke up for the day we weren’t sure we wanted to do it because it was super windy out. Grandma knew from the outset that she did not want to brave it, but the kiddo and I decided to give it a go. We got ready and took a taxi to the group meeting spot, even that small task being somewhat of an adventure. 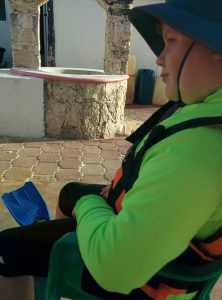 The summit organizer met us and walked us over to the boats. She asked the owner if they wanted to go ahead with the tour, since there were only two of us. They agreed! We were getting a private tour at budget prices! They proceeded to fit us with life jackets, snorkels, masks and fins and got the boat ready.

It was already a bit choppy as we headed out, but the guide very clearly knew what he was doing and was not at all bothered. He spoke very little English though, and with my tiny bit of Spanish I had no way to explain my concerns about sea sickness, which was already starting to set in. I had some ginger to help keep my stomach calm, while kiddo seemed OK. 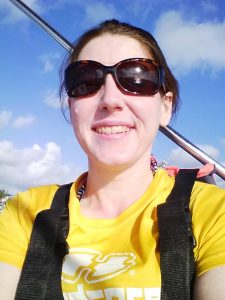 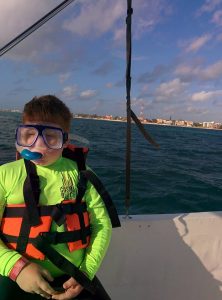 The guide took us out to the reef where he got set up on a mooring and encouraged us to jump in! That was a bit of a nerve wracking step for me for some reason for just a fleeting moment, encouraging my 8 year old to jump into the open ocean! Of course kiddo wasn’t the slightest bit concerned.

The water isn’t that deep at the reef, like 8-12 feet. The reef breaks the waves, so they weren’t too high, but were still present. They bobbed us up and down as we got in.

The guide got in with us and proceeded to swim kiddo around using a buoy. Meanwhile, I was having trouble keeping up with them. I am a decent swimmer but not used to swimming against waves, even small ones. The guide was clearly a very strong swimmer. I stopped for a break to adjust my mask and he came over and encouraged me to grab on too. He then swam us all around the reef, pointing things out. What luxury!! Not only did we get a private tour, he did the majority of the swimming, and pointed out the most interesting sea creatures and corals! I even got to see a sea turtle!! 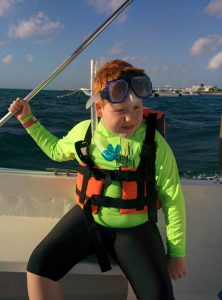 (Kiddo did not see the turtle because he wasn’t watching the guide’s gestures, but also he told me later he hadn’t seen as much as I had because his mask was fogged up.)

As cool as it was, the waves were making me feel increasingly queasy.  When the guide got us back in the boat and asked if we were ready to move on to another spot on the reef, he seemed very surprised when I told him no. We had only used a portion of our allotted time. I try to convey using my very limited Spanish that we wanted to be done. I didn’t know how to say that kiddo and I were tired, I was not feeling well, and wasn’t sure if I could take it. 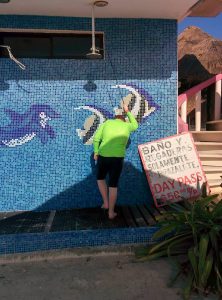 He got the gist of it anyway and brought us back to shore. We headed to the showers, completely forgetting that we were meant to go on the glass bottom boat tour too. I’m not sure they understood why we were cutting it all short, but I tried to make sure they knew we were happy with how it all went. I thanked them profusely and gave a good tip.

All in all, what an awesome experience! We are so fortunate.