We just got back from Mexico, our first international family trip since achieving location independent income. We all had a blast and learned a lot! This is the first installment of our travel story.

Our reason for choosing Mexico, and Puerto Morelos in specific, was to join in the Project World School Mexico Family Summit, a gathering of home educating families that travel with their kids and learn from the world.

For this holiday we had one of the grandmas with us, on vacation from her job as an inspector. This gave us a reason to limit our trip to 6 days long. We also chose to make things as nice, convenient and easy as possible to ease into world travel and to hopefully give everyone a nice first experience. 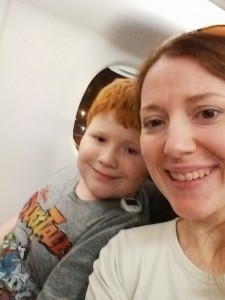 We originally booked our tickets way back in August 2015. We asked Grandma to join us shortly thereafter and her ticket was booked separately. This meant that when the airline changed our flights in November that she wasn’t officially part of our group, and was re-seated separately in a different part of the plane. Luckily they kept her on the same flights. We know for next time to book the tickets together if we intend to travel together.

They bumped up our first flight to very early in the day, 6:15am. This necessitated an overnight stay the night before. When I went to book an airport stay/park/fly hotel I found out that many of them were filled up, and so we ended up at Days Inn and Suites – Des Moines Airport. It wasn’t horrible, but could have gone better. Our son got the most sleep, with Grandma and husband next. Unfortunately I got only 2-3 hours in total.

Despite some issues with their shuttle bus, we ended up getting to the airport with plenty of time. Security was much easier than expected and we found ourselves with lots of time to wait. We boarded the plane for our son’s first memorable flight and made the first leg of our trip from Des Moines to Denver. He was a bit anxious during takeoff and landing, but in general the flight was fairly uneventful. It was dark so there wasn’t a lot to see when we left and when we got to Denver it was too cloudy to see anything there. 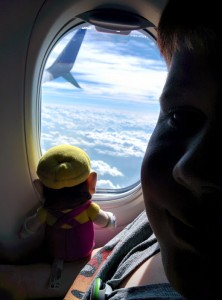 We then spent a few hours waiting in Denver (another downside to United changing our flight times) before flying on to Cancun. We were able to see a bit more on that flight. We noticed lots of odd circle patterns on the ground, which I later learned were patterns from irrigation devices. We were also able to tell when we got to the gulf, and when we reached land again in Mexico. Out of all our flights, I liked the pilot the best on the DEN-CUN flight because he explained each time something notable was going on, and a few times also pointed out where we were at.

We hoped for an easy time once we got to Mexico, and were lucky on that front too. On the flight they had given us only one of the two forms they said would be needed to clear immigration and customs but said they were out of the other one, so we weren’t sure what to expect. Although the lines were VERY long, once we got to the front we were passed through immediately and without issue. We claimed our luggage and I quickly filled in a form for our family at customs where lines were short. We had to push a big red button used to randomly select people for extra screening. Fortunately for us we were not selected and so after a friendly woman had a check of our bags to see the food we’d brought along, we were quickly on our way.

We made our way towards the exit, where we knew our transportation was meant to be waiting for us. Even though I knew it would cost way more than taking the bus, I had booked Happy Shuttle, a private van service, to take us directly from the airport to our accommodation and back. I communicated with one of their reps a few times in advance to give them the property address, flight times, etc so that they would be ready and was even able to pay in advance via PayPal.

Once we stepped outside, it clearly wasn’t winter anymore! Instead we had sun, palm trees, exotic birds and heard lots of Spanish being spoken. It didn’t take long for us to find the Happy Shuttle rep who quickly got us to a clean, air-conditioned van with friendly driver. I gave him a copy of the map to our location and he did his best to get us there as quickly as possible. We even saw a double rainbow on the way! He ended up calling the property’s caretaker for more specific instructions once we got close, and as we approached the condo I caught sight of a coatimundi! Wow.

I had spent a lot of time choosing a gorgeous condo for us to rent, and boy did it deliver!! We arrived to what felt like paradise: 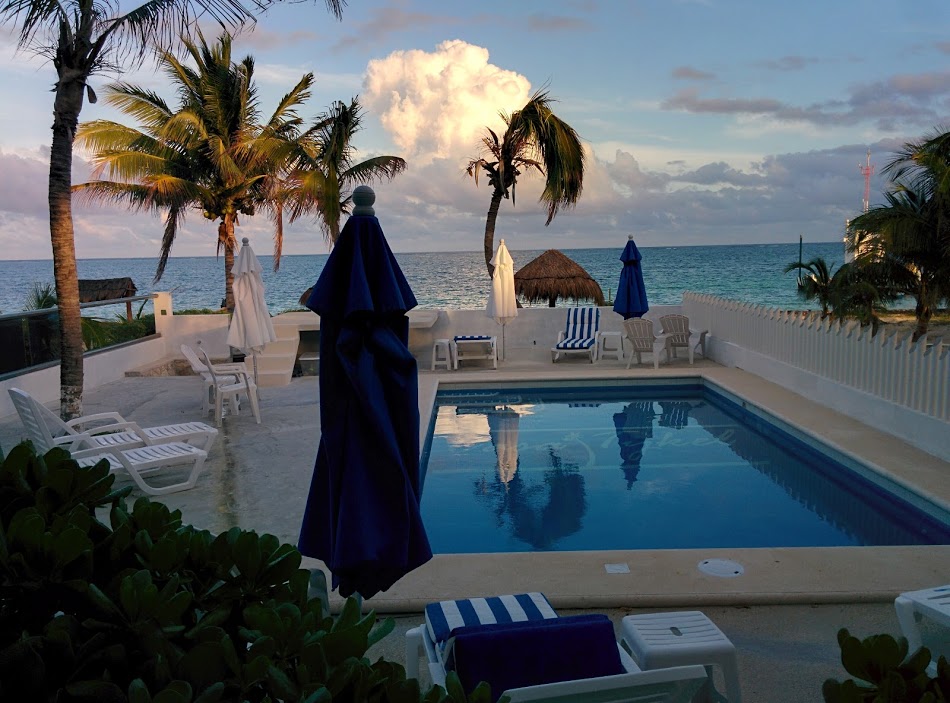 It’s called Casa Tykel, and is a four story condo with private pool. Staying in the ground floor suite we had three bedrooms, two baths, with full kitchen, living area, and patio space with hammock — all for slightly more than the cost of the double queen room at Days Inn!! (I know which I’d rather stay at.) 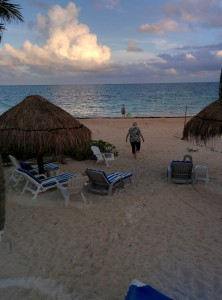 We immediately set to making ourselves at home and then had a walk down to the beach. While it is public, there weren’t many people on that stretch. While Grandma and our son played in the sand, my husband and I had a walk up and down the coast a bit each way as it got dark. I almost stepped on a crab! They come out of little holes at night near the edge of the surf.

We could hardly believe how beautiful it all was and all felt very grateful.