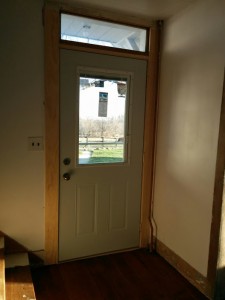 At long last we finally got our new exterior doors! There’s nothing that special about them really, but it’s still nice to have them installed.

The front and side doors were off the shelf doors from Menard’s, but they are a great improvement over what we had before. They aren’t drafty for a start! They make the house more cozy and soundproof than it was before. They match the patio doors we installed in the back, with the lift and tilt blinds inside the glass. We’ll have to touch up the plaster around them a bit as some was damaged during install, but on the upside there’s less lead paint to strip where the door frames were replaced.

The door to the basement had to be custom ordered because it is an odd size. Even though it should have been fairly simple, ordering it was a miserable process. I went in with the measurements and then they forgot to send them in for the quote, then never called or emailed once they did have it. Once it was ordered, it took several weeks longer than estimated to be made and delivered to the store. Communication throughout was non-existent unless forced. Once it arrived, it was the WRONG DOOR! But we kept it because the guys had already installed it before I saw it and it’s not that bad.

Whatever. Doors are all in now, and were one of the last things we had planned to do for the exterior of the house.