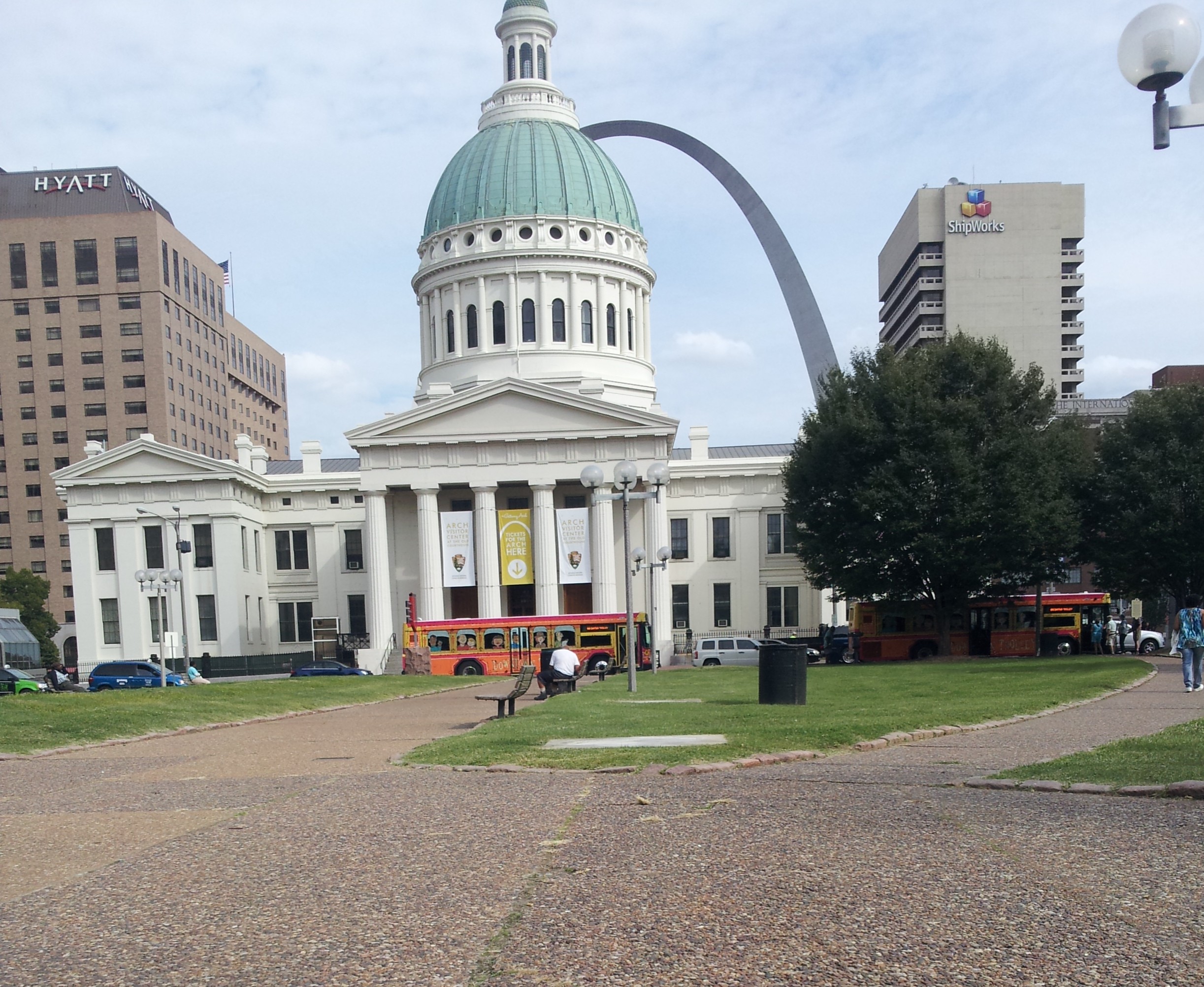 Now that Dad has gotten used to his new job, we thought it was about time we took a trip to see how it works for him to do his job on the move.  Kiddo needed to see his speech therapist in Nashville, TN so we decided it was a good opportunity to test out Dad’s ability to work from anywhere and make an extended stop on our way home.

We settled on spending a couple days in St. Louis, as there were a lot of interesting things for us to do there and it was right along our route. I found a really nice brownstone style apartment for us on VRBO, our first time using that site for accommodations.

It couldn’t have gone better! The place was located in the Shaw neighborhood, within an easy walk to the Missouri Botanical Garden as well as a fabulous little bakery that served vegan cupcakes. It was a cute little two bedroom with full kitchen and lots of space. It had fast internet, comfortable furnishings and free parking. Our host was fantastic. He was easy to communicate with, generously had a dozen donuts waiting for us when we got there, and offered us free use of his family pass for the botanical garden.

Kiddo and I spent the first day sleeping in, walking around the neighborhood and using the internet until Dad was able to clock off a bit early to join us for a trip to the botanical gardens. We were very impressed! The grounds were large and beautiful. There were many different types of gardens, an enormous geodesic dome, a temperate house, hedge maze, children’s area and more. We could have easily spent a lot more time there and hope to go back some day.

The next day we did something we’d never done before, and kiddo and I went off on our own for an adventure in a new city while Dad worked! I used the internet to order us a cab (kiddo’s first every taxi ride) to take us to the Old Courthouse downtown. There we purchased tickets to go up inside the arch. We were unfortunately too late to get tickets for the river cruise (last boat was at noon), but that gave us plenty of time to do other things.

We made the walk from the courthouse down to the grounds under the Gateway Arch, marveling at its size. The land between the two was under construction while we were there, but when done green space will extend from the courthouse to the arch, including a large grassy space the size of a city block going over the I-44 interstate! We marveled at just the size of the arch from outside near the base.

Security was very tight inside, with metal detectors, bag scanners and lots of guards. People entering were directed to either the north or sound base of the arch to get in line for the ride to the top. We weren’t quite sure where we were going. The path wasn’t well marked and we just guessed we were heading the right way. We finally got to the loading area where a guide assigned us to a gate and explained how each capsule could hold up to 5 people. Kiddo said he felt like he was in a spy movie, and the surroundings could likely have fit in.

It was a bit of a cramped ride up to the top, but luckily we were in with only 2 others on our trip both up and back. Having one empty seat free makes it seem much less crowded than I’m sure it would be otherwise. It takes about 10 minutes to make the journey up. While in transit you can’t see much, mostly the walls with the occasional stairwell or maintenance area. Once up top, you can spend as long as you like. The windows are tiny, panoramic things and you must lean (almost lay down) on a carpeted platform to see out them. On one side is a fabulous view of St Louis, with the stadium, courthouse, and other downtown buildings. The other has the river, but is otherwise fairly uninteresting. While many people look for a minute and then go back down, we spent a good long time at the top, waiting to look out each of the different windows.

When we finished at the arch, we made a quick stop to see the inside of an old church called The Basilica of Saint Louis, aka The Old Cathedral. At the time we weren’t sure what it was, but we’ve since learned it is the oldest building in the City of St. Louis. Inside there were large paintings featuring the stations of the cross with an enormous crucifixion scene as the centerpiece. It prompted quiet a discussion with our kiddo as there were pews with kneeling areas, confessionals, a fount, and other unfamiliar things.

We walked back to the courthouse for a water and a look around at the upper levels of the historic building, including the rotunda area that overlooks the lower levels and a courtroom set up to resemble the way it would have looked when the Dred Scott trial was taking place there. While the building holds a lot of history, it wasn’t particularly interesting to us so we moved on relatively quickly.

As we were exiting the the courthouse, Kiddo saw a building in the distance that resembled Princess Peaches’ castle (complete with peaked red roof) and asked a tour guide about. He told him the name of the building, Union Station, but that didn’t really help us to know much about it. We decided to head in that direction. We walked across the street into the green space there, past the amphitheater and on to the park that followed. I knew it led to the Citygarden, and I wanted to see that. We spent some time there relaxing, playing in and around the fountains and sculptures there (something they specifically have signs saying that they welcome).

We decided to take the trolley that goes around the downtown, to see if we could get closer to the Princess Peaches’ Castle looking building, and to see what else we might find. In the end we weren’t able to see it, but we did get to see more of downtown without having to walk it all.

We capped off the day with a visit to the AMAZING City Museum, the last stop on the trolley. The place almost defies explanation! It’s a museum consisting of re-purposed objects, including lots of architectural pieces, housed in a former shoe factory building. They don’t give out maps, visitors are encouraged to explore! There are floors and floors of exhibits, (inside and outside) with things to climb on and in, slide down, play with, etc. and they are constantly adding on and changing things. In the middle of a room there might be a slide down to a different floor. Or you might find yourself walking up a ramp into the mouth of a sea creature, through a treehouse like climbing area made of bars and wood, then crawling down underground below the cement floor. One time we went through a tunnel and ended up at a hidden arcade filled with vintage pinball machines and other games. It’s just madness — the fun kind!

We weren’t sure why were doing it, but when we got there we paid extra for wristbands to the roof. We just wanted to have access to everything we might want to explore. Turns out there is a ferris wheel up there along with many other crazy things, like a bus that extends out over the side of the building, a huge metallic praying mantis slide/climber, a fountain and more. The view from up top is great! Additionally you can slide from the roof all the way down to the bottom floor. We didn’t try it (too risky for Kiddo) but we heard people saying how much fun it was. All in all, roof access was totally worth it!

We needed to book ourselves a taxi back to the apartment, but my phone battery was fading fast. I didn’t have the charger or any other way to request a ride back, so I had to book it while I still could. We know we missed so much when we had to leave sooner than we might have liked, but at least it ensured we could get back without issue. We had a really nice cab ride back too and met up with Dad who had long since finished work for the day.

We really enjoyed our visit to St Louis and we hope to return someday soon! It was such an awesome start to our travels.